The following illustrations, text and photos is an example of the Technical Papers presented at the NISA Spring and Fall Technical Conferences.

Components of the conveyor, belt scale and weigh bridge assembly.

The conveyor speed and slope should not exceed that at which material slippage occurs. Accurate weight totalization requires that material velocity matches belt velocity. This may require that the scale be located a considerable distance from the loading point on a steeply inclined, high velocity systems handling certain materials. 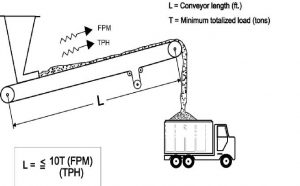 Conveyor length should not exceed that which assures that the belt will travel at least 3 circuits while delivering the minimum totalized load for which accurate weight information is required.

All idlers should be of rigid frame construction with a horizontal roller section. So called “V” rolls and “limber” rolls are not advisable.

There shall be no tripper or moveable head pulleys in the conveyor.

The conveyor should be equipped with a constant-tension or gravity-type take-up.

The scale should be installed within 50 feet of the loading point but not closer than 6m (20 ft) or 5 idler spaces to the end of the skirt board.

If there is a concave curve in the conveyor between the scale and the loading point, the scale shall be installed so that the belt is in contact with the idlers at all times for at least 6m (20 ft) or 5 idler spaces, whichever is greater, before and after the scale. A concave curve beyond the scale shall start no closer than 12m (40 ft) from the scale.

If installed on a conveyor with a concave curve, the scale must be installed in a section of the conveyor where the belt is straight (not necessarily horizontal) and in contact with at least 8 idlers to either side of the scale throughout the entire loading range (empty to full load).

Straight conveyors are preferable to curved conveyors. Convex curves are permissible at a distance of 20 feet or 5 idler spaces beyond the scale.

Material test using a truck scale as the reference scale

Advantages
1. Simulates some conveyor belt effects.
2. Easy to apply.
3. Conveyor belt does not have to be stopped to apply weights.
4. Linearity test easy to perform.
5. Detects load cell failures, and applies force to the load cell.
6. Acceptable simulated test.

1. Can be self-contained within the electronics.
2. Checks all electronics including electrical circuits of load cell.
3. Quickest and easiest of all calibration checks.

Disadvantages:
1. Does not detect all types of load cell failures; does not apply force to load cell.
2. Does not simulate conveyor belt effects.
3. Requires calculated factor for incline.
4. Electronic calibration does not provide a traceable conveyor scale calibration standard.

1. Stability of the scale and associated integrating equipment to environmental changes and time.
2. The rate at which material collects on “weighed parts.”
3. Uncontrollable conveyor parameters.
4. Conveyor maintenance.
5. Required accuracy.

U.R.2.3 – Material Test – A belt conveyor scale shall be installed so that a material test can be conveniently conducted (non-retroactive as of January 1, 1981). Added 1980.

U.R.3.1- Loading – The feed of material to the scale shall be controlled to assure that, during normal operation, the material flow is in accordance with manufacturer’s recommendation for rated capacity.

N.1.1- Official Test – An official test of a belt-conveyor scale shall be a materials test.

N.1.2. – Simulated Test – Simulated loading conditions as recommended by the manufacturer and approved by the official with statutory authority may be used to properly monitor the system operational performance between official test, but shall not be used for official certification. (Amended 1991).

N.2 – A belt-conveyor scale shall be tested after it is installed on the conveyor system with which it is to be used and under such environmental conditions as may normally be expected. It shall be tested at normal use capacity and may be tested at any other rate of flow that may be used at the installation.

Each test shall be conducted for:

(b) at least three revolutions of the belt, and

N.3.1 Zero Load Tests – The variation between the beginning and ending indication of the master weight totalizer shall not be more than plus or minus 1 scale division when the instrument is operated at no load for a period of time equivalent to that required to deliver the minimum totalized load of 1000 scale divisions.

The zero-load test shall be conducted over a whole number of belt revolutions, but not less than three revolutions or 10 minutes of operations, whichever is greater.

During any portion of the zero-load test, the totalizer shall not change more than three scale divisions from its initial indication. (Amended 1989)

N.3.2.1. Accuracy of Material – The quantity of material comprising the material test shall be weighed statically to an accuracy of at least 0.1 percent.

N.3.3. Simulated Load Test – As required by the Official with Statutory authority, simulated load tests as recommended by the manufacturer are to be conducted between material tests to monitor the system’s operational performance, but shall not be used for official certification. (Amended 1991)

T.1 Tolerances Values – Maintenance and acceptance tolerance on material tests, relative to the weight of the material, shall be plus or minus 0.25 percent of the test load. (Amended 1993)

T.2 Tolerance Values, Repeatability Tests – The variation in the values obtained during the conduct of materials tests shall not be greater than 0.25 percent (1/400) Added 1993)