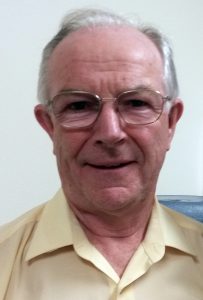 Robin, who is now retired, has worked in the weighing and measurement industry most of his life.  With a degree in Electrical Engineering from England, Robin emigrated to Montreal, Canada in 1965 and worked in the space industry, military radio and mainframe computers before starting Scale-Tron Inc. in 1971.  As a professional engineer, he developed one of the first digital batching systems for concrete.

A frequent traveler, Robin has traveled the world for sales and installations, visiting countries such as Japan, Hong Kong, China, Borneo, Dubai, Greece and Italy.  Robin is married with 2 children and 2 grandchildren. His wife, Leona, has 3 children from a previous marriage, plus 3 grandchildren and one great-grandson. In summer Robin likes to race his sailboat, cycle and take photographs during his travels. In winter he likes to play jazz with a local band and develop websites for friends and weighing companies.

Robin has been a member of NISA since 2010 and Leona attend most meetings. He served as President of NISA from 2017 to 2018 and has presented at several technical conferences.